Posted on October 9, 2016 by MichelleMarie

Some people aren’t loyal to you…

Be AWARE of these PEOPLE, but don’t BE those PEOPLE. AND yes LOVE these people because LOVE never fails. 💖 but don’t expect them to be what they cannot. Thanks for the heads up @shelleygiglio Lisa Bevere I saw this on Facebook and I loved it immediately. I learned this one the hard way.  Guard your heart it’s the wellspring of life!  Sometimes these people can be family members. I’ll never forget what Bling said to me,  “Bling never let anyone hurt you twice.”  She’s right, I never do. I simply have… Read More

Postale carde from Paris for Bling via me Oui’ Oui’

To Bling, With Love from my  Imaginations of  Paris in my Oklahoma Mind. Thank you!  Love, Bling ❤️

il est charmant—He is charming. He is my white knight in blue jeans she told me, and I believe her. He calms me when the storms of life surround me, He tells me everything will be okay! Even in death we are not separated because I carry him inside my heart everywhere I go. I hear his voice whisper quietly laughing at what a mess I’ve made, as I scream for justice and take my stand. Still he stands behind me like the old oak tree we planted when our love was… Read More

To Bling from Baby Bling

Posted on February 25, 2016 by MichelleMarie

Posted on February 17, 2016 by MichelleMarie

Once they start falling, the petals on my roses I dry them so I can always hold them. Surrounded by my Blingspirations from Bling! Hi Bling!

Posted on February 17, 2016 by MichelleMarie

Posted on February 14, 2016 by MichelleMarie

All was found but nothing-Bling writing project

I forgot who I was without all this stuff around me to cling to. So much of who I believed myself to be was wrapped up in this stuff,  this house, this town, all the starting over. Memories packed in boxes as if they would keep me from seeing the real truth. Boxed up maybe to avoid seeing they were nothing but chaff on the trashing floor of my life. And now they were “kindling,” fire the fire chief said. This silly old book was all that was left and it too… Read More

Art by MichelleMarie Autumn Chicago Color Therapy For my friend~ Fun Grace & Humility Inspiration Inspiration from my Uncle It's a TRAIN thing Music n Me My Angel My Pa My sister My thoughts Nikon | iPhone photography Our Journey Quotes Quotes from me to you Storms Sunrises—Don't let me miss this! Sunsets Sunsets of Oklahoma, tellmeaboutit Things I love Tulsa Time Uncle Gunn Watercolor Wildflowers of Oklahoma Wordless Wednesday

A Closer Look Inside

Meet Me Underneath the Oklahoma Skies 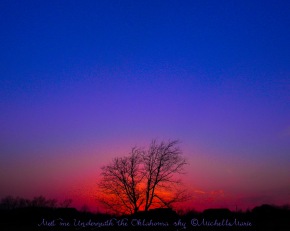 Meet Me Underneath the Oklahoma Skies

A Lifetime is Never Enough-Memories of my Pa